We become a Community

We Become a Community

Social activities of the little group of homeowners were in the form of frequent get-togethers at each other’s homes. It had been suggestion that their small but growing community should have a name. A meeting for this purpose was held in early 1938 at the home of Richard Lutticke, 7732 W. 72nd Street. Approximately two-dozen people attended. Lutticke suggested the name “Bridgeview”, stating that he had been influenced by the view of the area from the Harlem Avenue bridge situated at the north entry into the community. One other name, “Oketo”, was offered and then a vote was taken. The name Bridgeview won by a slim margin of one vote!

The next step after selecting a name was to become a legal entity by organizing as a non-profit organization. At the same meeting, officers were chosen, by-laws adopted, and on July 2, 1938, after a ten dollar fee was paid, the organization became certified with the Office of Secretary of State as “the Bridgeview Community Club.” The twelve directors of the club were listed as:

On August 1, 1938, the Bartlett Realty Company donated (for a legal transaction sum of one dollar) a piece of land on the southeast corner of 75th Street and Oketo Avenue. To enable the new organization to build its home on this spot, fund raising had been started with weekly $25 contributions per family.

Social activities netting over $150 were held that year at Lindeman’s Lonely Acres Tavern on Archer and Cork Avenue in Justice, the Frontier Tavern at 79th Street and Harlem Avenue, and at the Clearing Town Hall. On May 7, 1939, club president Hubert Shoritt, turned the first shovel of dirt in ground breaking ceremonies for the historical Community Club Building.

Material for the structure was purchased from the Argo Lumber, Coal and Supply Company, the Schenk Lumber Company, and used lumber from the Loeb Wrecking Company. Labor was donated by residents who worked evenings and week-ends to keep the project rolling. Before the end of August, fifteen concrete piers and a floor had been poured, and the building was steadily taking shape. Club member Lutticke designed the one-story building, making it structurally strong enough to accommodate a future second story.

In 1962, resident Marie Smith wrote in the Bridgeview News a description of the early years of the Community Club and building. It read, in part:

“The building was made usable a little over a year after ground was broken. It was then that community affairs started being held. Water was hauled in 10-gallon cans for use in the kitchen. Oil stoves provided the heat and buckets were the “comfort-stations”.

Ed Spadoni loaned the community club a portable radio-phonograph every Tuesday night and there was square dancing with Glenn Braasch doing the calling.

According to the original long-hand records, starting April 10, 1939, the entertainment committee consisted of the following 7 members: Mrs. R. Leutticke, Mrs. E. Pulido, Mrs. R. Bunde, Mrs. E. Haerr, Mrs. R. Braasch, Mrs. F. Ranger (Schmidt), and General Chairman Mrs. S. Edwards. Some of the folks who so freely donated of their time, plus donating food and what-have-you were the Sam Edwards, the Ray Bundes, the Hubert Shoritts, the Leuttickes, the Pulidos, the Braaschs, the Brodys, Mrs. Vanosky, Sarah Ranger, the Shortts, the Brozyks, the Klancirs, the Bullions, the Belansos, the Suizzos, the Burmiesters, the Nisbits, the Kruegers, the McMullins, and the Fenstermachers.

Each Saturday was free “open house” night with a different group taking charge of the kitchen and entertainment. There were no chairs, only nail kegs with boards. Later, benches and tables were made. Sobiesk Funeral Parlor donated the use of chairs for larger occasions.

The rains would pour into the hall and volunteers would continually sweep it out with a quickly formed broom brigade.

As time went on, many improvements, additions and repairs were made in the Community Club. So many people rolled up their sleeves and pitched in, it is impossible to name them all. The tradesmen in the village donated their skills such as wiring, decorating, sheet metal work, etc. The second floor was completed. On Memorial Day, 1946, it was dedicated as the Clayton Lund Hall in memory of Mr. & Mrs. George Lund’s son, the first Bridgeview boy to lose his life in the service of our country.

The time came when Bridgeview obtained its first fire truck and an addition was put on the east side of the Community building to house it. Funds continued to be raised through concerted efforts of the group of interested residents. They held an untold number of dances and games parties. Later, rental received from use of the hall for weddings, showers and other social affairs further helped keep it open. The fund-raising affairs were financed by the donation of food, prizes, etc. As just one example, the original records list donations from 36 individuals and businesses for one affair.

Almost all organized groups in Bridgeview had their start in the Community Building. This is where the village board held their meetings, court was held, the Southwest Baptist Church was started and services held. The Pentecostal Church still holds Sunday services here (as reported in 1962).

Through the years, the officers of the club have painted, repaired, sewed curtains, washed windows, scrubbed floors and “comfort rooms”, etc. Each group has wholeheartedly been devoted to keeping an open house for all. The Community Club is still kept and cared for by a small devoted group who were among the first to realize the present building has been outgrown by the fast expansion of the village. Plans are now underway to replace the present building with a new adequately equipped Community Building big enough to open its doors to everyone in the village wishing to use it.

Everyone’s hope is that the same warm enthusiasm will be displayed by the residents of the village today, as was shown by the “old-timers”, to get behind a good cause and support all fund-raising activities that will be needed to construct the new building. When erected, the new building will be adequate to house any social function such as organization dances, weddings, showers, anniversary parties, etc., plus continuing to service the children’s organizations as it does today. There no longer will be the necessity to go out of the village to hold large affairs.

At present, the Community Building is the permanent meeting place for Bridgeview’s Boy and Girl Scouts, the Brownies, the Campfire Girls, the Bluebirds, the Teen Club, the Explorer Scouts and the American Legion.

The Bridgeview Community Club is a fine asset to the community and deserves the support of everyone interested in the growth of Bridgeview.”

Replacement of the Community Club Building never took place, but its use as a meeting place for our various civic organizations and other community activities continued.

In the June 1971 issue of the Bridge Views, the village’s official newsletter, it was stated of the Community Club Building:

“Current Community Club President Earl Goreham says the old structure was recently examined by an engineer and shown to be quite sound. He added that tentative plans call for a thorough renovation of the total facility, so that the Bridgeview Community Building may serve as a prominent center for the village’s 25th anniversary, to be observed next year.”

At about the same time that the June newsletter was being printed in May, disaster struck. It happened Thursday, May 13th at 11:30 p.m. A youth entered the police station across the street from the Community Building exclaiming to the woman radio operator, “The Community Club is on fire!”

Equipment from nearby firehouse #1 responded within moments, but the blaze had gained a good start. Club president, Earl Goreham, summoned to the scene, stood by helplessly as he and other residents watched firemen pour water onto the flames that were ravaging the memory filled structure.

The fire was finally extinguished, but the interior of the building was gutted. A facial make-up demonstration the evening of the fire was likely the last function ever to be held in the old landmark structure. The fire department report listed the fire as being of undetermined origin, with the possibility of arson.

Some people felt the venerable landmark of thirty-two years had outlived its usefulness in a community now geared for a much faster pace. But for some of the early folks it was a last link to those days of Bridgeview’s yesteryears. That tie is now permanently severed. The last paragraph in the June 1971 Bridge Views article reads:

Come and listen to the old walls as they whisper their tales of days when there were no electric lights, gas for cooking, telephones, sewers and water, nearby shopping or transportation. We have them all now, along with the memories of those who helped “pave the way”. And the Bridgeview Community Building lives on.

Bridgeview lies within four separate townships with a corner of each meeting at the intersection of 87th Street and Harlem Avenue.

The original Bridgeview area was in Lyons Township, which until 1902 included the present Stickney Township. The little community of Bridgeview remained unincorporated until 1947 when some of its leading residents expressed a fear of becoming incorporated into an adjacent area, namely the Nottingham community. (Nottingham, which lies on the east side of Harlem Avenue, remains unincorporated to this day.)

A referendum on the issue was held June 14, 1947 in the Clayton Hall of the Community Building. The results were: 132-Yes, 19-No, and 3–Spoiled Ballots. On July 16, 1947, Bridgeview was certified as an incorporated village with boundaries from Harlem Avenue (East) to Roberts Road (West) and from approximately 69th St. (North) to 83rd St. (South),

On September 13, 1947, a referendum was held to elect the first governing body of the new village. Two slates of candidates vied for the homeowners’ votes in a cleanly conducted campaign. A president, clerk and three trustees would be elected to serve four years each, and the remaining three trustees were to serve two years.

The winning People’s Party candidates and their votes were:

The six trustees and their votes were:

Current and Former Mayors of Bridgeview 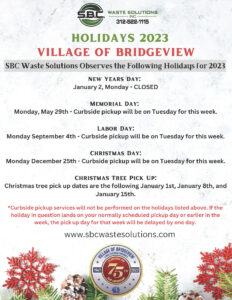